Live an exceptional experience at the Aiguille du Midi!

The Aiguille du Midi has been a must in the Chamonix-Mont-Blanc Valley for more than 65 years. From the center of Chamonix, the Aiguille du Midi cable car transports you to 3842 meters above sea level, at the gates of the High Mountain and in just 20 minutes.

The history of the Aiguille du Midi cable car

As early as 1905, two Swiss engineers were the first to have the idea of linking the hamlet of Les Pèlerins to the summit of the Aiguille du Midi via a cable car. This project encountered technical problems and was abandoned. Several years later, a French company, Les Trains Funiculaires, made a new attempt and succeeded in converting this project into reality. Indeed the first section of the cable car linking Les Pèlerins to La Para was opened in 1924. The second section up to Les Glaciers was completed three years later. The Aiguille du Midi cable car was then the "highest cable car in the world" and for the first time, it was possible to reach 3,800 meters in a few minutes and without effort. During the 2nd World War and with the opening of the Planpraz cable car at Brévent, the popularity of the Aiguille du Midi cable car declined and closed in 1951. A new cable car, as we know it today, was built in just 5 years, between 1951 and 1955 and was completely renovated in 1991.

The Plan de l'Aiguille at 2354 meters above sea level is the intermediate station of the Aiguille du Midi cable car. It is the ideal starting point for off-piste skiing in winter and hiking, climbing and paragliding in summer and autumn. From this intermediate station, you can also make a beautiful hike by connecting the Plan de l'Aiguille to the train station of Montenvers and the Mer de Glace, then go down to Chamonix by taking the train. In addition, one of the normal Mont-Blanc routes, the ascent of Mont-Blanc via the Grands Mulets starts here. 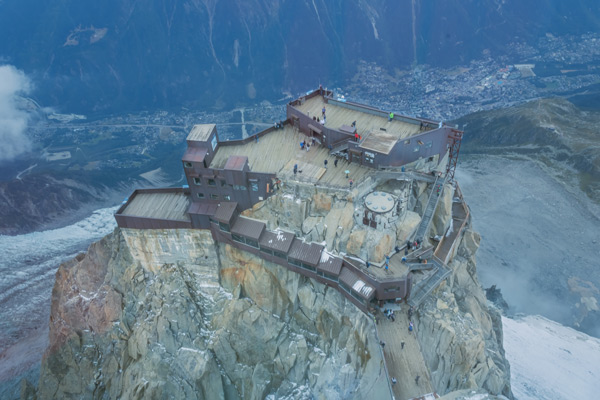 What to do at the top of the Aiguille du Midi cable car?

From the top of its 3,777 meters, the Aiguille du Midi and its terraces offer a breathtaking 360° view of all the French, Swiss and Italian Alps. Thanks to an elevator, you can access the summit terrace at 3842 meters and thus discover a breathtaking view of Mont Blanc.

The Mont-Blanc area is a real space for rest and contemplation. Installed on the benches facing the large bay windows, rest with a view of the mythical peaks of the massif. All year round, a souvenir shop as well as a bistro and a snack bar are open to you. The restaurant named "3842m" is one of the highest in the world and invites you to taste Savoyard specialities.

The Aiguille du Midi site is the starting point for many mountain races including the ascent of Mont-Blanc by the three mountains. Many renowned mountaineers have left their mark here. And to pay homage to them, the highest Museum in the world will be created at an altitude of 3777 m. The summit of the Aiguille du Midi cable car is also the starting point in winter for the mythical Vallée Blanche.

The Panoramic Mont-Blanc, a journey between France and Italy

Open only in summer, you can take the Helbronner gondola for a panoramic trip over the Glacier du Géant to reach the tip of Helbronner in Italy. It is the highest gondola in the world. The round trip takes 2 hours from the Aiguille du Midi and 4 to 5 hours from Chamonix. You can, if you wish, also go down the cable cars on the Italian side to go down to Courmayeur.

The tube is a 32 meter long steel gallery in order to go completely around the central peak of the Aiguille du Midi, and this at more than 3700 meters above sea level without retracing your steps.

Step into the void

It is a glass cube, glazed on 5 of its sides, which was placed along the rocky peak of the Aiguille du Midi and which offers an exceptional view of Mont-Blanc and the Chamonix valley and more than 1000 meters of void under your feet. Inaugurated in 2013, it has become the flagship activity at the summit. 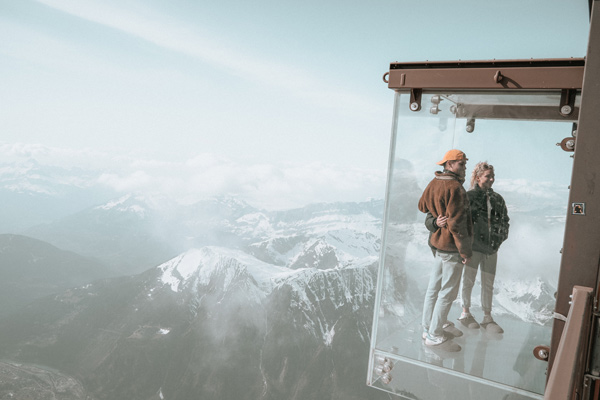 The Aiguille du Midi cable car is open all year round, in summer and winter, and closes every year from early November to mid-December. The first ascent is at 7:30 a.m. or 8:10 a.m. and the last descent is between 4:30 p.m. and 5:30 p.m. depending on the period. There is a cable car every 10, 15 or 30 minutes depending on the crowd. As for fares, for a round trip they are 62.10 euros for young people and seniors and 73.00 euros for adults (from 15 to 64 years old inclusive). There are also more advantageous "Family" packages as well as special rates if you only take a one-way trip or if you stop at Plan de l'Aiguille.

The Mer de Glace in Chamonix